A few days before the closing of Danius Kesminas’ PUNKASILA show at the Monash University Museum of Art, an email went round seeking Indonesian women who could help on the day. It seemed simple enough. Kesminas was after people to dress in the band’s trademark combat fatigues and act as ushers for the exhibition. A dozen friends sprang to mind who would love the theatrics of it. But the response from Indonesian contacts was circumspect. For some, donning the uniform meant aligning themselves with what they saw as an anti-establishment, anti-government group. Some were students, in Australia on Indonesian government scholarships. They felt word could get back to Indonesia if they took part.

So what is PUNKASILA to have provoked such a response? It’s a ‘band-formatted art project’, made up of Kesminas and a revolving collective of artists from Yogyakarta, Indonesia. They play hand carved guitars shaped like automatic weapons, pose for endless paramilitary band photos, and sing songs with piss-take religious and political acronyms as lyrics. In Indonesia they’ve gigged all over the country, and were hosted by the Indonesian Ambassador at the 10th Biennale of Havana. Kesminas claims confusion over any apparent sensitivity. He says there’s no political aspect to the band and if there is, he’s not aware of it.

There’s a lot more to the project than whether it is or is not political, but its creative centre seems to lie in this tension between a punk cynicism that, like Kesminas, explicitly disavows political content, and the complex Indonesian context in which this cynicism was born. Kesminas is right in that PUNKASILA’s work is not political in any narrow party-political sense. Instead, the group could be seen as giving expression to an Indonesian version of the fierce cynicism that is currently aimed at entire political and economic systems the world over.

PUNKASILA originated from Kesminas’ 2005 Asialink Arts residency in Yogyakarta. The 9-piece collective is a kind of supergroup put together from members of numerous local bands, with the common thread that the Indonesian members were all studying at the Indonesian Institute of Arts. In addition to their musical backgrounds they are painters, sculptors, video artists, animators, photographers and fashion designers. Kesminas had no Bahasa Indonesia and the others had almost no English. In the studio they simply jammed, using punk and rock as a common language. When it came to the question of lyrics, they kept things simple: a list of acronyms Kesminas had come across in a book of Indonesian political history.

Only it wasn’t so simple. As the Indonesian band members quickly explained, every acronym had multiple meanings. There’s a tradition of what’s known as plesetan, which can be translated as ‘slip of the tongue’, where word-play and punning are used to entertain, but also to flip hierarchies and power relationships on their head. In PUNKASILA’s lyrics, this slip of the tongue turns RPKAD, the Army Special Reserves, into “Let’s have sex, but the child will be yours!”; while PNU, Partai Nahdlatul Ummat, the Islamic Awakening Party, morphs into Partai Nunut Udud, the Party for Taking your Friends’ Cigarettes. It’s a great pun for a bunch of art students used to bumming smokes; it may, or may not, suggest corruption on the part of the party in question.

The name PUNKASILA itself is almost but not quite the Pancasila, the five founding principles of modern Indonesia: belief in one god, a just and civilised humanity, the unity of Indonesia, democracy, and social justice. These ‘five principles’, which were strenuously pushed by Indonesia’s notorious President Suharto, get twisted into ‘punk principles’. The group’s satire has some big targets.

There’s another Javanese idea that helps explain what’s going on here. Pasemon means an allusion, an insinuation or a facial expression that says it all – that knowing look behind someone’s back. As language, education and culture became more authoritarian under Suharto’s New Order administration, writers, journalists and artists used these playful strategies to say one thing and mean many others. It led to open-textured work that was at once satirical, serious, immature and ingenious. PUNKASILA seems to sit squarely in this tradition. Such an approach aligns beautifully with contemporary art strategies that privilege multivalence.

The collective’s huge body of art objects, on display at MUMA, function in the same ambiguous way. While in Indonesia Kesminas collaborated with numerous local craftspeople to produce everything a punk band needs. Their hand-carved mahogany instruments are at once functional guitars, traditional carvings, and precise replicas of automatic weapons. Their microphones look like hand grenades. The band’s uniform of military fatigues, with all their symbolism of order and the State, are rendered fashionable, local and idiosyncratic through traditional batik processes. These aspects combine in the band’s obsessive photo shoots to produce a fascist-boy-band aesthetic, one that marries pop-kitsch and advertising with unsettling echoes of masked guerrillas or jihadi fighters. Kesminas is there in every shot, wearing aviators and a bandanna like an extra from Apocalypse Now, his presence a knowing pasemon wink at the camera. 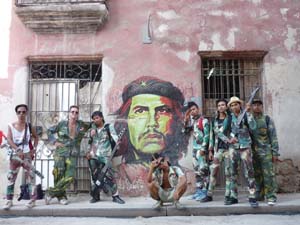 Times have changed in Indonesia. There is not the same need for artists to camouflage their views. Neither PUNKASILA nor their volunteer ushers would face official repercussions for making old-fashioned political statements, should they want to. The thing is, they do not. According to Indonesia scholar and author Max Lane it is hard to overstate the extreme levels of popular cynicism towards politics in Indonesia. In just two of the latest scandals, hardline Islamic politician Arafinto, who helped pass tough anti-pornography laws, was caught watching explicit videos on his phone during a parliamentary debate; and the Treasurer of President Yudhoyono’s Democratic Party was recently arrested in Columbia after four months on the run over corruption allegations.

Things may look better from Australia, with roughly ten percent of the Indonesian population achieving middle-class status. These are the people likely to have children in Australia on scholarships, who would perhaps prefer to distance themselves from something like PUNKASILA. But in the newspapers, and on the streets of the megalopolises, the sense of anger at corruption, unequal concentration of wealth, general stagnation and lack of social progress is palpable. In the latest AUSAID survey, Indonesians gave their country’s two major democratic institutions – the upper and lower houses of parliament – satisfaction ratings of 45% and 36% respectively.i

As Lane sees it, without political representation, these forces spill over into fierce sarcasm, and a huge and contradictory range of subcultures. From the working poor through to students, anarchist punks and religious extremists, the general disillusionment with politics bubbles up in the form of fundamentalism and militancy, as well as art, music, and a cynical consumer culture. Indonesian cigarette brand ‘A Mild’ has become hugely popular, with ads featuring corrupt bureaucrats, power cuts, and paralysing elit culture all rounded out with the slogan Tanya Kenapa: ask why! The results of this mash are at times irrational – conspiracy theories, bombings, superstitious sects – but can also be highly creative. PUNKASILA bundles all of these elements into one strutting, grinding, performance art package.

In some respects PUNKASILA’s aesthetic has a lot in common with the London riots, giving expression to a huge and public anger that is at once political and apolitical, expressed through the seductive image of masked youths out to protest grinding poverty and police brutality, while wearing, or stealing, name-brand sneakers. Hahan, PUNKASILA’s whippet-like singer and his masked, cigar-chewing, Adidas-wearing collaborators would make the ultimate late-capitalist rioters. Because of their ‘no politics’ claims and their sarcasm, they might be the face of politics today.

It is a challenge to capture PUNKASILA’s energy in a museum context. If you were lucky enough to see the band at Melbourne’s Ding Dong or the Espy, you would have a sense of the energy that animates their practice. For most though, the band must be accessed via their art-objects.

While the MUMA show avoids a Rock n Roll Hall of Fame feel – the guitar-guns rotate ominously on automated machine-gun tripods, and there are plenty of demented music videos to watch – the impression is still subdued. The enormous hand-painted, flame-filled banners do not quite fill the space. But what is inevitably absent in live energy is made up for by the intricate texture and detail of the objects on display. The extensive memorabilia further reinforces the consumer culture aspect of their work, giving the sense that all of this creative agitation is very much for sale. The highlight is a hand-carved bastardisation of the Indonesian coat of arms, the Garuda Pancasila eagle. It clutches an M-16 guitar in place of the usual Bhinneka Tunggal Ika (‘Unity In Diversity’) slogan. PUNKASILA’s practice does in fact suggest Bhinneka Tunggal Ika, but not in the patriotic way it was intended. PUNKASILA’s unity is located not in a centralised government, but in a messier, more abrasive space of shared anger, cynicism and humour.