Insecurity System explores those great Australian traditions of ‘being a good neighbour’ and ‘spying on your neighbour’ in the new global context of being alert and extremely alarmed. Using home security technology to expose rather than protect the artist’s own house, it pits our desire to see – raunchy voyeurism and political surveillance – against our desire to remain protected and invisible. 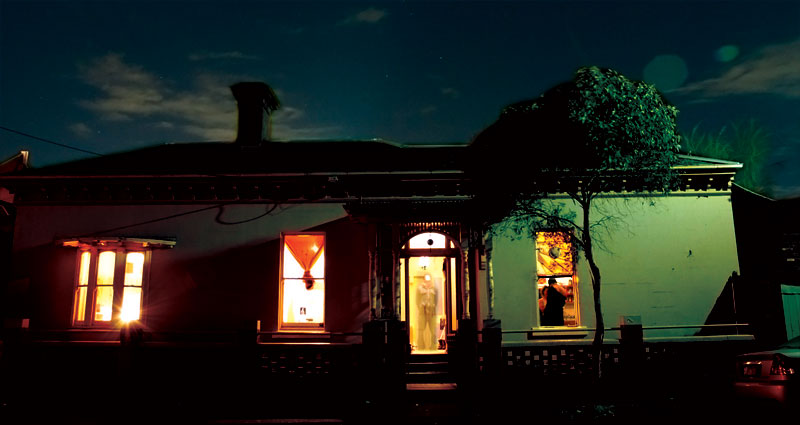 How it worked: I conducted a kind of benign surveillance on the house about a month before the show. We set up cameras outside in the street and filmed through the window, taking in everything from boring domestic scenes (as most surveillance actually is) to staged seductions and dubious late-night soldering sessions. The footage was then subtly manipulated and edited together, then projected onto screens in the windows by a row of projectors inside the house. The effect was that what you saw from the street, at least to start with, looked real. The proportions, scenes and characters were exactly what our voyeuristic audience were used to seeing through our windows, only this time made strange.

Insecurity System was in many ways an attempt to create dialogue in our neighbourhood about the community we live in, and an excuse to talk to our neighbours. On a domestic level, people constantly stop outside our house and stare in through our windows. It’s right on the street so it was logical to put on a show for them. IS was also staged around a time of increased surveillance and policing of the Coburg and Brunswick Muslim communities, and a wider international context of nation-states becoming increasingly concerned about their neighbours (e.g. bombing of Lebanon, war in Iraq). We mixed all of these elements into the work, and spent the show itself out in the street talking to and documenting the responses of passers-by.

The show was partly for its festival audience, but mostly for the locals who walk past the house every night.’

Reworked as: Insecurity System II in Adelaide, on North Terrace opposite the State Library.