CLEAN was an ambush-style audio installation, bringing the dirty side of Melbourne to life in the midst of the sparkling white 2006 Commonwealth Games. As part of the 2006 Next Wave Festival, CLEAN explored what it means to scrub up a city in the name of sport.

From 15 March- 2 April 2006, CLEAN took the roar of the crowd, the breathless excitement of victorious athletes and the sparkling spokespersons’ speeches out of their official context, and hid them amongst the bins and cobbles of one of Melbourne’s best-known laneways. A cluster of hidden speakers in Hosier Lane celebrated the stories of the homeless, embarrassing doping scandals, fierce protests and the drunken revelry of tourists alongside sound-bites, speeches and anthems.

The material for CLEAN was taken from several months of lurking in the central city, working with the incredible Urban Seed and their Credo Cafe,  getting to know the locals, recording their stories and keeping track of the police and security movements as the Games approached. The soundscapes of Australia’s Olympic and Commonwealth Games glory we used to juxtapose life on the street came from the ABC’s sound archives, going all the way back to the 1930s.

CLEAN aimed to stimulate dialogue amongst locals and visitors alike on what kind of a city people want to live in. CLEAN  contrasted who was placed on a podium with the people who were swept under the carpet.

As part of the ‘clean-up’ of the city, we also took the liberty of wallpapering a significant chunk of Hosier Lane. We  covered the famous graffiti with a custom-made pattern featuring a royal golden crest made from the bodies of athletes, over a deep red background containing drawings of unutterable filth.

For CLEAN we also created a 30-minute broadcast work, commissioned by the ABC Features and Documentaries Unit and broadcast nationwide on JJJ and Radio National’s The Night Air during the Commonwealth Games. I’ll post it up here when I get a chance to dig it out of the archives and turn it into an mp3.

The hardware for the project was generously hosted by Andy Mac of City Lights fame.

Funding from: Next Wave Festival, Australia Council for the Arts, ABC. 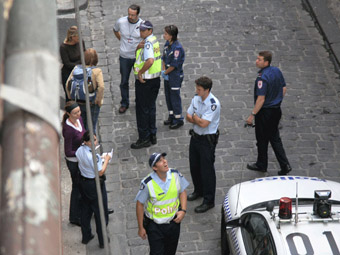 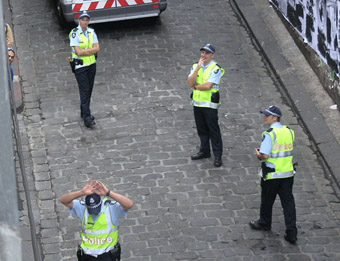 Graffiti writers versus public artists. Funding legitimacy versus community legitimacy. The fractious arts community versus itself. Private Commonwealth Games security guards versus the customary streetlight. The very environment makes it hard to ignore that the street art component of Next Wave is on disputed turf, and some of the best works in the program have harnessed contention to their advantage.

Taking no prisoners in the battle against saccharine public art is the arresting Clean, championing the city’s homeless people and graffiti artists, both of whom had been made more unwelcome than usual in readiness for the Games. The stencil-art mainstay of Hosier Lane is infested with the ghosts of the repeatedly evicted street dwellers, in the form of sensor-triggered audio recordings. The always cringe-inducing “You don’t have any change, do you?” drops like an epitaph in this little space, as it starkly and suddenly illuminates the mass deportation of the city’s poor. The surveillance state paranoia of officialdom is cheerfully inverted, as Big Issue vendors and drunken teens harangue you from above, in place of the silent police cameras. (Hosier Lane in fact sports a blanket and bottle that some hapless sleeper has abandoned, I like to imagine, in their irritated flight from the self-fulfilling prophesies of the sound-art work made to mourn their passing. But anyway.) Under Clean’s umbrella of official art approval, or perhaps just the usual surrender to the cult stencil status of the lane, graffiti here is largely unmolested by council cleanups, densely layered as always, and Clean’s own small street decorations (parodic wallpaper with a repeating council wall-buffing motif) are already vanishing beneath a layer of fresh scrawls.

[New Commonwealth Games] regulations basically criminalise homelessness and mental illness, as its the homeless and the mentally ill who would be most likely to breach the absurd list of dos and don’ts … The laws are so broad that anyone behaving even slightly out of the ordinary could get into strife, such as a homeless person snoozing out in the open or a mentally ill person being overly boisterous. And forget doing anything even remotely political, as there is a complete ban on public speaking in all of the Games management areas.

So incensed was I at the nastiness of all this that I had intended to completely ignore the cultural component of the Games. However, there is one related art project deserving of mention because it directly addresses the official attempts to cleanse the city of people deemed unfit to be united in the moment.

As part of the Next Wave Festival’s Empire Games, a sound installation in Hosier Lane gives voice to Melbourne’s dispossessed. The sound, transmitted from hidden speakers, consists of contrasting narratives: the fanfare and rhetoric from past international sporting events interspersed with recordings of homeless people and other marginalised Melburnians.

Nicolas Low, one of the artists behind the project, says it’s a “counterpoint to the carefully orchestrated facade that has been created”.
“If these people are going to be cleaned up, I’m going to put them back.” He deserves a medal.

You can read a feature on CLEAN in Spinach7’s Signature Magazine here.

We also got a run in: 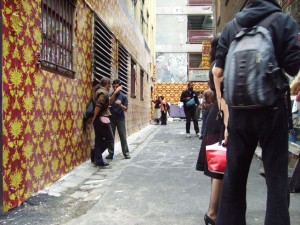 A further aspect of the project that unfolded over the course of the Commonwealth Games was the need to document not just the social and subjective impact of the cleanup on the city’s more marginalised inhabitants, but to also gather some concrete data. I worked with Urban Seed, a non-profit, independent advocacy organisation to compile a survey of service providers who worked with homeless and injecting drug users in the central city. The idea was  to capture statistics on rates of incidence involving the massively increased numbers of police and private security guards in the city. To further push the issue and get a public platform, we jacked up a series of early morning ‘cleanup reports’ on 3CR, with legal and homeless experts speaking about the impact the Games was having down on the street.

CLEAN also expanded to include presenting the opening lecture in the Melbourne School of Continental Philosophy & RMIT’s Philosophy and Architecture 2006 series. I spoke about CLEAN and the politics of public space during major internation events, gave a sneak preview of the audio and looked at the relationship between carefully orchestrated displays of national / civic pride, and the city’s organic, subterranean economies which are both threatened by, and resistant to the public spectacle. 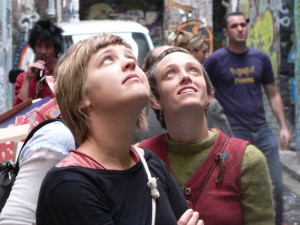 More information about the project, from the original website:

CLEAN is an exploration of the process of ‘cleaning up’ a city that accompanies any major international sporting event. Focussing on the process that is transforming Melbourne for the 2006 Commonwealth Games, it will celebrate the spirit of civic and sporting pride, as well as complicate, critique and parody the meticulously staged version of civic and national identity such transformations seek to create.

A multi-channel, non-linear audio installation, CLEAN is based upon recording conversations and soundscapes from some of inner-city Melbourne’s forgotten population: homeless people, street sweepers, drug users, skaters, graffiti artists, buskers and so on. These city narratives, absorbed by the walls over the years, will be coaxed back out into the day: voices will filter out of cracks in the pavement, laughter will bubble up out of gratings, stories will be dripped drop by drop into the public ear from overflowing drainpipes.

Alongside these stories, CLEAN takes the roar of a home crowd, the breathless excitement of a victorious athlete and the sparkling rhetoric of Games spokespersons out of their official context, and secrets them away amongst the bins and cobbles of one of Melbourne’s best known laneways – Hosier Lane. Using a cluster of hidden speakers, the project’s humorous, bizarre and at times impassioned experimental soundscapes will place these offical, ‘clean’ aspects of Commonwealth Games Melbourne in an intriguing dialogue with the whispering, singing, chattering and shouting of the city’s ‘undesirable’ elements.

CLEAN provides a street-level insight into the impact the Games transformation is having on Melbourne’s diverse populations. As a counterpoint to the city’s carefully orchestrated official façade, the resulting recordings have been used to create an emotive and organic audio environment which is generated by, and presented in the city’s unregulated public spaces themselves. It seeks to transform the city’s public space in a way which generates dialogue about how those spaces should themselves be used and transformed.

CLEAN is part of the Next Wave Arts Festival, and will coincide with the Commonwealth Games themselves in March 2006. From bizarre sporting commentary to disjointed conversations and fragmented bursts of historic news reports, the installation will conjure up and celebrate the emotional and metaphorical debris that these clean-ups intend to banish. From physical cleaning of city streets to the political cleanup of protest and dissent, CLEAN will stimulate dialogue amongst the local Melbourne community, and our international visitors, on what kind of a city we’re trying to create. What is placed on a podium, and what is swept under the carpet?

As well as reaching a wide audience of local residents and international visitors during the Games in Melbourne, CLEAN has been commissioned by the ABC Radio Documentaries and Features Unit to create a 30-minute radio program to be broadcast nationwide during the Commonwealth Games themselves. At 8.30pm on Sunday 26th March 2006, we will be broadcast on The Night Air. This will provide enormous coverage, placing the artistic and cultural issues raised in front of a national audience at a time when they are most pertinent.
Working with the ABC also allows CLEAN to make use of their extensive archives, a goldmine of great historical sporting and moments which well express Australia’s cherished spirit of celebration and competition. This archival material will also provide the installation with historical context, affording insight into the cultural trends and processes which have informed previous transformations in Australian cities. Key historical events will include the 1956 Melbourne Olympics (love those British/Australian accents), 1982 Brisbane Commonwealth Games (The Whole World’s Watching – Australia’s powerful land rights protests), and the 2000 Sydney Olympics (glory, ticket scandals and where have all the homeless people gone?). 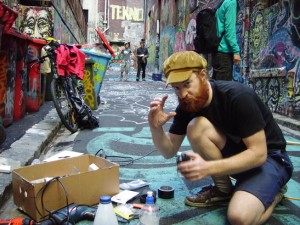 These resources deal with homelessness in Melbourne in general, and also in light of the Commonwealth Games.

Here’s a list of some background news stories on a potential cleanup of Melbourne for the Commonwealth Games. It’s been brewing for quite a while – from anti-graffiti agitation to calls to crack down on beggars, it’s stories like these which have led to the creation of CLEAN in the first place. The main issues have been begging, homelessness and graffiti, but others are emerging in the leadup to the games, most notably alleged suppression of political postering and protest. 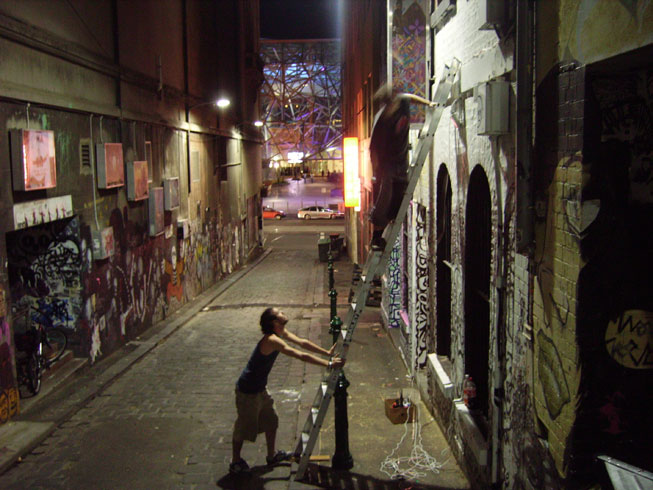 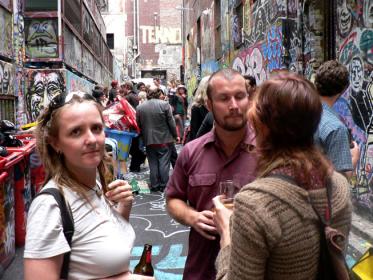 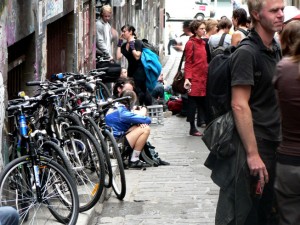 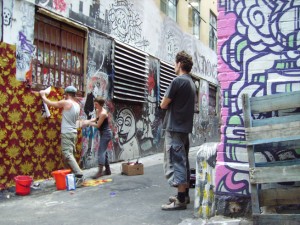